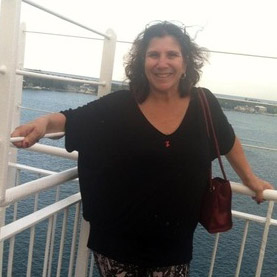 Marlene Marin was born in Brooklyn, New York.  Her father, who was an NYPD Police Officer, was experiencing health problems and when Marlene was 8 years old she and her family relocated to North Miami Beach, Florida.

Marlene was an exuberant and outgoing child, and her love for people, nature and making a true difference to both, has remained strong and compelling over the years.

Marlene truly fell in love with the beach and Biscayne Bay during her early teen years, while spending every weekend surrounded by friends at the popular Haulover Beach.  Her love for the water and marine life have intensified in adulthood, and she has been an avid boater since meeting Joey Godoy in 2000.

Marlene is an amazing and truly inspirational person!  She graduated from high school with the belief that she was not as smart as others in her class.  When asked she states “I never felt smart.  I always have had to struggle a lot to learn.”  In 2010 Marlene’s middle daughter was experiencing a serious seizure disorder and was having difficulties learning in school that struck a familiar feeling with Marlene.  As a result, Marlene had her daughter tested and discovered that she has a very rare mutation of contactin 4 (CNTN4) gene where three (rather than the normal two) copies of CNTN4 exist on the third chromosome, which can impair brain circuitry.  She also discovered that this mutation is genetic and, when she herself was tested, discovered that her instincts were indeed correct.  Marlene has the disorder as well.  True to her typical style and positive outlook on life, Marlene recognized that she has never been deterred but has actually been motivated by her challenges.  She has observed in both herself and her family that being passionate about something and making a hands-on difference has rewards way beyond the obviously cleaner Bay and healtier wildlife.  Taking a role in caring for our environment gives everyone a plethora of benefits which include a sense of purpose, heightened self-esteem, and marketable skills for the job market, just to name a few.

Marlene’s background makes her perfectly suited for her role as Vice President of the Biscayne Bay Foundation.  She has achieved many noteworthy accomplishments.  Some highlights include:  Marlene is a licensed Private Investigator; she earned her Black Belt in Karate in 1985 and also participates in Kickboxing; For the past 9 years Marlene and Joey Godoy have participated in the Multiple Sclerosis (MS) 150 Bicycle Ride, a 150 mile long bike ride from Miami to Key Largo and back in which all benefits go towards fighting to find the cure for MS.  Additionally Marlene was the Soccer Coach for her oldest daughter’s soccer team for 8 years.  Now her oldest daughter has taken over to coach the team.  All three of her girls have participated in Girl Scouts of America, and Marlene has served as a Co-Leader for their Troops throughout the years. Among other things, she has been a pre-school teacher and has been self-employed in advertising since 2007.

“My greatest desire is to see our beautiful Biscayne Bay and all of its inhabitants clean and well cared for.  I have been successful in overcoming my own challenges and now I want to advocate and encourage others to ‘Pay it Forward’ through contributing their time, talents and treasures by joining us here at the Biscayne Bay Foundation in restoring the bay’s natural beauty and ecological balance!” Marlene Marin